On October 11, 2011, the California Regional Water Quality Control Board in Lahontan County issued an Amended Cleanup and Abatement Order No. R6V-2011-0005A1 requiring PG&E to provide interim and replacement water supplies to the residents of Hinkley, California, whose wells were impacted as a result of the discharge of untreated cooling water containing hexavalent chromium to unlined ponds at the Hinkley Compressor Station. The Order consists of four provisions relating to:

Whole-house water treatment was identified as one of the methods to be evaluated in the feasibility study to provide replacement water for indoor domestic uses for impacted wells in the affected area, as defined by the Order. On behalf of PG&E, ARCADIS conducted a Whole-House Water Treatment Pilot Study in support of the April 2012 Replacement Water Supply Feasibility Study.

The Order stipulated that, for the purposes of evaluating the performance of the water treatment systems in meeting the Public Health Goal (PHG), the levels of hexavalent chromium in the treated groundwater supply must be below the analytical laboratory method reporting limit of 0.06 μg/L (the method reporting limit [MRL] is slightly higher than the PHG due to analytical method limitations. The Order, as written, also requires that the replacement water must meet all California primary and secondary drinking water standards. However, the latter provision would not appear applicable to the situation where PG&E provides a replacement water supply where hexavalent chromium has been removed from well water, leaving only constituents that are not present as a result of PG&E’s actions.

New! 11/19/2013 – Decision on Requests by PG&E and the Members of the Hinkley Community to Change Whole House Replacement Water Program and Plume Delineation Requirements 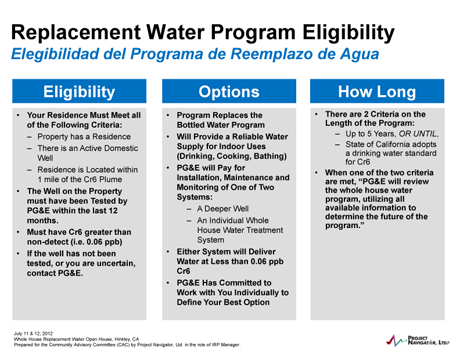 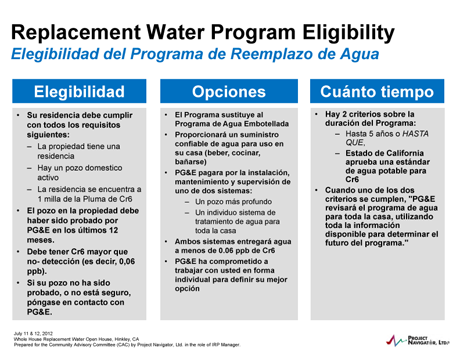