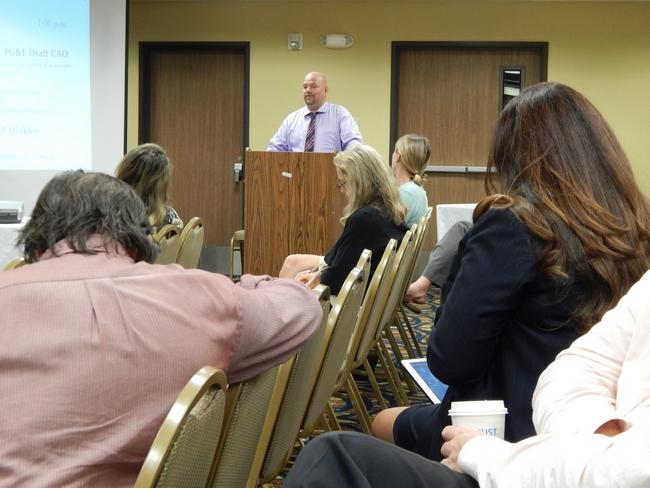 Hinkley resident Daron Banks makes a comment during the Lahontan Regional Water Quality Control Board meeting Wednesday at the Holiday Inn in Lenwood. Banks said whatever is done should be about right and wrong, not dollars and cents. Mike Lamb, Desert Disaptch

BARSTOW — A proposal to change the way the Chromium 6 plume boundaries for Hinkley are defined in a new cleanup and abatement order for Pacific Gas and Electric drew concern and was debated Wednesday.

The Lahontan Regional Water Quality Control Board held its September meeting at the Holiday Inn in Lenwood to discuss the draft of the cleanup and abatement order that is scheduled to be finalized by November.

“I believe there is more certainty using this interpretation method … rather than connecting dots,” a water board advisory team member told the board. Doug Smith is a senior engineering geologist.

“Because the subsurface is something that cannot be seen, we have to rely on geologists, civil engineers, hydrologists to poke holes. The subsurface is very diverse and in the Hinkley area there has been thousands and thousands of years of sentiment.

“We cannot ever see that from the surface. So what geologists have to do, we have to poke holes,” he said. “We have to make best professional professional judgments where things are.”

The water board prosecution team pointed to two maps on the wall in warning how different the boundaries could look. One map was from 2014 and another was constructed by a PG&E contractor using criteria from the draft order, according to the prosecution team. The plume boundaries were a lot different, with the plume smaller in the newer map.

The proposed reporting requirements for PG&E call for mapping to be consistent with the industry standard of best professional judgment by a California licensed professional geologist or professional engineer.

Previous orders which were issued prior to the State of California setting the Chromium 6 drinking water standard at 10 ppb required PG&E to define the extent of chromium in the upper aquifer to maximum background levels. Monitoring wells were not to exceed one-quarter mile distance from other monitoring wells in accessible areas.

Board member Peter Pumphrey, from Bishop, also questioned the change.

“Why is there not simply value in generating a map that shows all the data points, and then allow someone to say on the map, note we don’t believe it’s in our best professional judgment that this area is the responsibility or is linked to the discharge?,” Prumphrey asked.

Assistant Executive Officer Lauri Kemper, who is on the prosecution team, said that is the current procedure. She said PG&E is allowed to use insets on the map to disagree with certain boundaries.

“We would argue that is something we should continue,” she said. “It seems premature to make this kind of change now.”

PG&E’s director of remediation then told the board he wanted to make sure that the possible consequences of the maps are considered.

“We have an obligation to try to convey a richness of information so people can make intelligent decisions,” Kevin Sullivan said. “My concern is that we are simply relying on a number that is 3.1 (ppb), which is a number that is not certain and being reviewed by the USGS (United States Geological Survey). It depicts a very black and white depiction of where someone is in a perceived plume or out of the perceived plume.”

Hinkey resident Daron Banks argued that it doesn’t matter if there are numbers below 3.1 (ppb). He said PG&E agreed to clean the Chromium 6 down to zero.
“I appreciate Kevin’s stance, but it’s about dollars and cents and not about right and wrong,” Banks said. “It’s about keeping PG&E’s PR. We are about people. The community has completely changed and will never be back to the way it was four, five years ago. We won’t get our stores back. At least not the way it was before.”

Water board staff will continue to accept comments until Sept. 30. The Water Board plans to consider adoption of a final cleanup and abatement order at its Nov. 4-5 board meeting, which also will be held in Barstow.