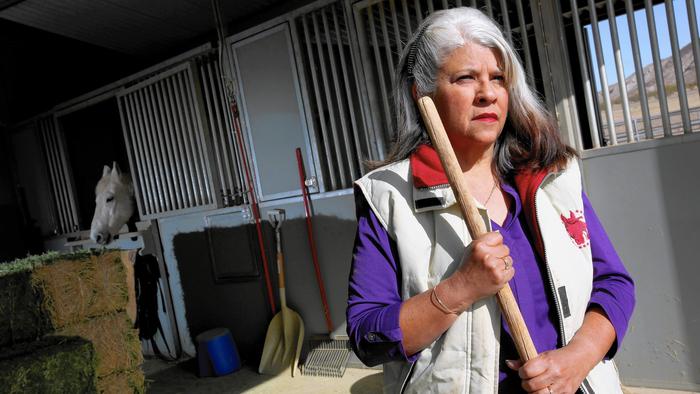 Fifteen years after the film showed triumphant residents winning a $333-million settlement with Pacific Gas & Electric Co. for contaminating its water — and nearly 20 years after the settlement itself — Hinkley is emptying out, and those who stay still struggle to find resolution.

For residents, questions remain about the safety of the water, just how much contamination PG&E caused and how to fix it.

This year, a final cleanup plan is moving toward approval. Last month, a long-awaited, five-year study to determine how much contamination PG&E may be responsible for finally got underway. 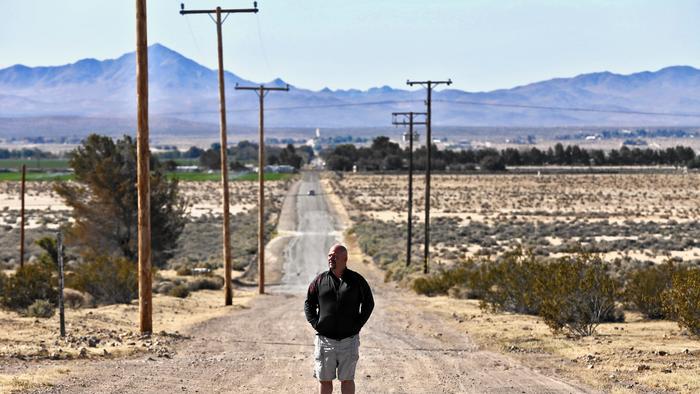 Daron Banks stands on the empty road that leads to his home in Hinkley, Calif. Nearly two decades after the town settled with Pacific Gas (Irfan Khan / Los Angeles Times)

“At some point in the next few years we’re going to get some closure,” Banks said.

But today there’s little left in Hinkley beyond some scattered homes and acres of alfalfa and other grasses, planted to help clean the contamination.

“You had a great community out here and now it’s gone,” said resident Roger Killian.

Hinkley was a small farming community in the 1990s when residents learned that groundwater was polluted with chromium 6, a cancer-causing heavy metal. It had seeped into the water after being dumped into unlined ponds at the utility company’s compressor station in the 1950s and ’60s.

Since then, hundreds of residents have left. Property values dropped because of the stigma surrounding the town, and PG&E launched a buyout program.

Roberta Walker, a plaintiff in the original lawsuit and Banks’ mother-in-law, said that at the time of the settlement, residents like her believed the plume of contamination was limited to a well-defined area around the compressor station.

But in 2009, PG&E “let it get away from them and it started migrating toward other properties,” said Lisa Dernbach, a senior engineering geologist specialist with the Lahontan Regional Water Quality Control Board, the state agency overseeing the cleanup.

Jeff Smith, a PG&E spokesman, said what looked like growth of the plume was actually the result of additional testing in areas that had previously gone unexamined. Dernbach said the migration happened after the utility changed pumping in some extraction wells.

More recently, the contamination plume appears to have shrunk. Kevin Sullivan, director of chromium remediation for PG&E, said a system installed in 2007 to treat the contamination with injections of ethanol has reduced the chromium by 40%.

Starting in 2010, PG&E offered to either provide clean water or buy properties of residents whose wells tested positive for chromium.

Smith said that when the program was announced, there was a high level of anxiety in the community and many residents wanted to sell their properties rather than take the water. The company, he said, wants to see Hinkley thrive.

“I think sometimes it’s misconstrued that PG&E wanted to come in and purchase a tremendous amount of land in Hinkley and that was just not the original intent,” he said.

Between 2010 and October 2014, when the program was formally discontinued, PG&E purchased about 300 properties, he said.

With residents leaving, the school could no longer be sustained. It shut down two years ago.

The owner of the property that houses the town’s post office and only market recently approached PG&E asking to sell and the utility agreed to buy, Smith said. The post office closed last month and the market will soon follow, an employee said.

As residents leave, the cleanup has progressed and technologies have improved. About 250 acres of alfalfa and other grasses now dot the town where some properties once stood and are used to help convert chromium 6 into the micronutrient chromium 3.

But despite the progress, many residents still worry about how much chromium 6 will remain in the water. PG&E is required to clean up to the levels at which chromium 6 naturally occurs in the groundwater — a number known as the background level.

A study commissioned by PG&E a few years ago said chromium 6 naturally occurred in Hinkley groundwater at levels of 3.1 parts per billion.

“Anything above 3.1 provided a lot of anxiety to the people in Hinkley,” said Dernbach, of the water control board.

Although levels of chromium 6 nearest to the compressor station — where no residents remain — exceed that by large numbers, PG&E’s testing in domestic wells elsewhere in the community shows chromium 6 levels below 10 parts per billion, most often between 0 and 5, Sullivan said.

But others say they are disturbed that chromium 6 is showing up in their wells at all. Some say neighbors and family members have suffered ailments they believe were caused by the contamination, leading them to believe that even low chromium levels are dangerous.

The safe drinking water standard adopted by the state — which is hundreds of times greater than a nonenforceable public health goal set by the state Environmental Protection Agency — has been criticized as too high by some environmental groups.

For years, residents questioned whether the study commissioned by PG&E putting the background level at 3.1 parts per billion was even accurate.

Banks solicited help from John Izbicki, a U.S. Geological Survey research hydrologist who has studied naturally occurring chromium 6 in the Mojave Desert. With pressure from residents, PG&E acknowledged that its earlier study was lacking. It is paying for a five-year study led by Izbicki that is expected to conclusively determine the background level.

At a community meeting this month, fewer than a dozen residents gathered in the Hinkley Community Center to hear Izbicki describe his upcoming study.

Izbicki said water samples would be sent to Germany, Nevada, Virginia, Northern California and other places for testing. Some of it would be handled in the same USGS labs that do testing for NASA.

When he was done, the meeting’s facilitator asked longtime resident McHenry Cooke, 81, if he would “trust the data.”

“I haven’t reviewed it all,” he said skeptically.

As the meeting wrapped up, John Turner, who volunteers to keep the community center open, said he felt optimistic about the town’s future. For years, community meetings have been filled with negativity, he said, but this one was productive.

He hopes PG&E will play a role in helping to rebuild the community so residents can move forward.